You may have heard that NHC is unveiling an experimental storm surge graphic this hurricane season.  We mentioned in our first blog post on May 29 that we would be discussing the background and interpretation of this graphic.  There’s a lot to cover, so instead of throwing it all at you in one shot, we are going to do a three-part series on the new graphic and communication on storm surge in general.  Here’s what we plan on covering:

Part 1:  Why do we need a storm surge graphic?

Part 2:  How is the storm surge graphic created?

Part 3:  How should you interpret the storm surge graphic? 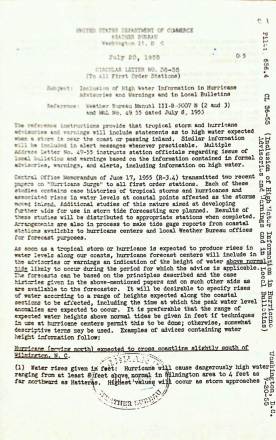 So, let’s get on with Part 1.  First, let’s look back at a little history.  Way back in 1955, the U.S. Weather Bureau issued a memo (figure to the right) to weather offices along the coast, directing them to refer to any water rise produced by a hurricane or tropical storm in terms of “above normal tide levels,” and those rises were to be specified in ranges to account for uncertainty.  Believe it or not, that policy went unchanged for over 50 years!  In 2008, the NHC Public Advisories for Hurricane Ike referred to storm surge like this:

“COASTAL STORM SURGE FLOODING OF UP TO 20 FEET…WITH A FEW SPOTS TO NEAR 25 FEET…ABOVE NORMAL TIDES ALONG WITH LARGE AND DANGEROUS BATTERING WAVES…CAN BE EXPECTED NEAR AND TO THE EAST OF WHERE THE CENTER OF IKE MAKES LANDFALL. THE SURGE EXTENDS A GREATER THAN USUAL DISTANCE FROM THE CENTER DUE TO THE LARGE SIZE OF THE CYCLONE. WATER LEVELS HAVE ALREADY RISEN BY MORE THAN 5 FEET ALONG MUCH OF THE NORTHWESTERN GULF COAST.”

For many years, we didn’t have the technology, nor sufficient accuracy in our track forecasts, to be any more specific in our Public Advisories.  The best we could do was give an estimate of the highest storm surge expected with a general description of where that surge could occur relative to the center of the storm.  Unfortunately, many times these statements were too vague for emergency managers and other decision makers to make sound decisions before a storm.  One question a statement like this could not answer:  “How far inland could the storm surge go?”

Another issue had to do with what are called vertical datums.  We’ll leave the more technical discussion of vertical datums for another blog post, but what you need to know for this discussion is that a vertical datum is simply a reference point.  The water level height caused by the combination of storm surge and the tide must be attached to some point of reference.  The operative question is “the height of the water level is 6 feet above what?”  The problem was that many people either weren’t specifying what the datum was, or they were confusing one datum with another.

Here’s an example, again using Ike, where confusion set in.  The figure below shows output from the National Weather Service SLOSH model indicating simulated water level heights from Hurricane Ike along the Texas and Louisiana coasts.  What’s the first thing that jumps out at you?  The first question many people have is why do the values increase (go from 15 feet to over 21 feet) as you move inland from the coast into Chambers and Jefferson Counties in Texas?  Shouldn’t the deepest water have occurred at the immediate coast?  The subtlety here is that the water level in this picture is depicted relative to a datum called NAVD88.  So, the water levels in Chambers and Jefferson Counties were more than 21 feet above NAVD88, not 21 feet above the actual ground at those locations.

Luckily, there’s a way to display how much water was sitting on normally dry ground, which is what most people typically envision when given storm surge heights.  Since we know what the elevation of the land is at each location, relative to the same vertical datum used for the surge data itself, we can subtract the land elevation from the surge heights to get a good idea of how high the water was above the ground at each location.  The next figure is the same simulation for Ike but instead shows this subtraction at play.  Notice any differences from the previous image? 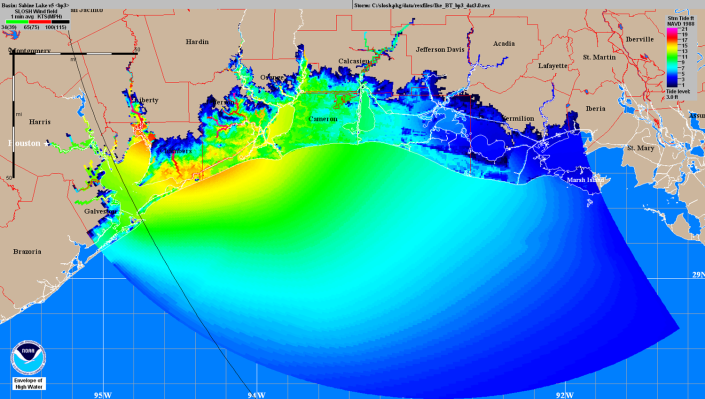 Now it should all make sense.  The highest values (about 15 feet above ground level) are located along the immediate coast and decrease as you move inland.

Recent hurricanes like Katrina, Rita, and Ike showed that we needed to make some changes in the ways that we communicate storm surge information.  And thankfully, we now have the technologies and capabilities to go beyond simplified text statements in the Public Advisory.  In Part 2 of this series, we’ll talk about the Probabilistic Storm Surge product, how it accounts for uncertainties in the storm surge forecast, and how it is being used to create the Experimental Potential Storm Surge Flooding Map for this hurricane season.

Beginning of the Atlantic Hurricane Season