Lifesaving NOAA Support Following the Sinking of the Bourbon Rhode 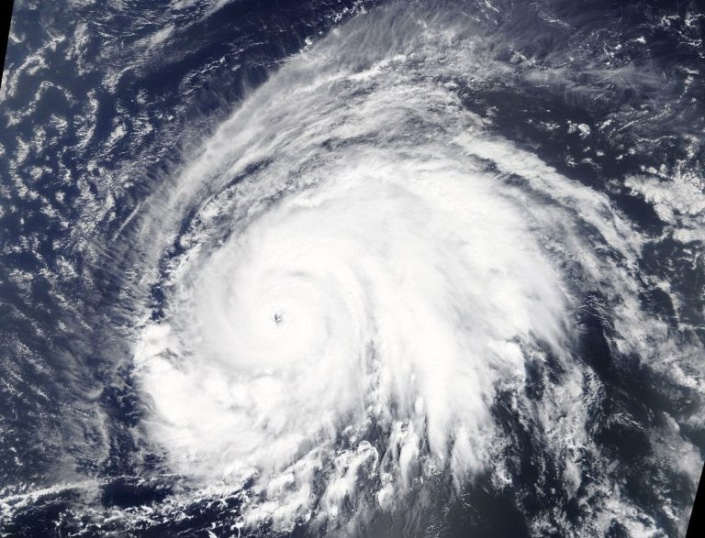 The National Oceanic and Atmospheric Administration (NOAA) provided critical assistance during the international search and rescue (SAR) and recovery efforts that followed the sinking of the M/V Bourbon Rhode in Hurricane Lorenzo last fall.  This intra-agency NOAA effort (see figure below) included Hurricane Hunters from the Aircraft Operations Center (AOC), scientists from the National Environmental Satellite, Data, and Information Service (NESDIS) and the Hurricane Research Division (HRD), and marine forecasters from the Tropical Analysis and Forecast Branch (TAFB) of the National Hurricane Center (NHC).

An organizational chart of NOAA offices that provided assistance during SAR and recovery efforts following the sinking of the M/V Bourbon Rhode in Hurricane Lorenzo.

On the morning of Thursday, September 26, 2019, French authorities received a distress signal from the M/V Bourbon Rhode, an offshore tugboat that was en route from Las Palmas, Canary Islands, to Georgetown, Guyana, with 14 crew members on board.  The Bourbon Rhode had made a dangerously close approach to the eye of rapidly intensifying Hurricane Lorenzo in the central Atlantic Ocean, and water was entering through the rear of the vessel.  At 0600 UTC (2 AM Atlantic Standard Time [AST]) September 26, Lorenzo was a Category 2 hurricane with 95-kt (110-mph) winds and seas 12 feet or greater that extended 240 to 330 nautical miles (275 to 380 statute miles) outward from its center. A 1200 UTC (8 AM AST) TAFB sea state analysis, issued around the same time as the last automatic identification system (AIS) signal from the Bourbon Rhode, showed peak significant wave heights in Lorenzo up to 41 feet.  By 1800 UTC (2 PM AST), Lorenzo had strengthened to a Category 4 hurricane with maximum sustained winds of 115 kt (130 mph).  The Bourbon Rhode ultimately sank on September 26 in the central Atlantic Ocean. 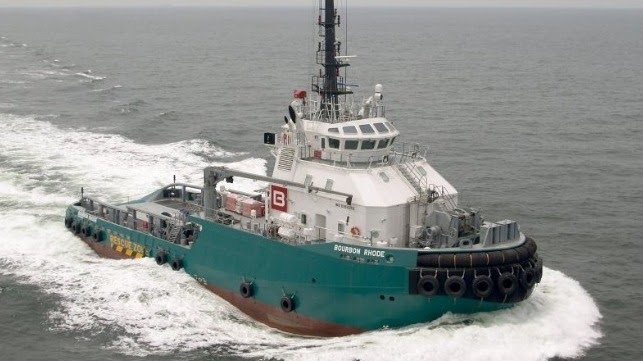 Since Hurricane Lorenzo was a major hurricane that posed no imminent threat to land, both of NOAA’s P-3 aircraft were preparing to fly dedicated research missions into the storm. As NOAA43 (nicknamed Miss Piggy) transited from Lakeland, Florida, to Barbados on September 26, the French Government and the United States Coast Guard (USCG) reached out and requested SAR assistance.  Meanwhile, the nearest marine vessel to the incident site — a bulk carrier named SSI EXCELLENT – was redirected toward the last-known position of the Bourbon Rhode.  Later on September 26, NHC/TAFB was contacted by the USCG Rescue Coordination Center (RCC) Miami to begin providing spot forecasts for surface wind and wave conditions that would impact vessels aiding in the SAR efforts.  The first TAFB point forecast for the rescue detailed the dangerous marine conditions that were still ongoing in the wake of Lorenzo, with gusty tropical-storm-force winds and combined seas of 20 feet near the incident site. 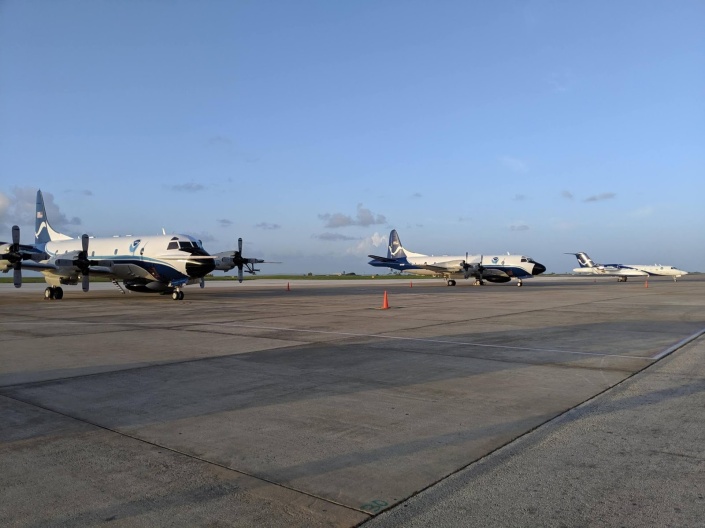 NOAA43 departed Barbados on September 27 with a crew (see list at the end of the post) of AOC personnel as well as HRD and NESDIS researchers.  As requested, they planned to fly over the locations of the last Bourbon Rhode distress signals and report any findings.  If nothing was sighted, the crew would continue on with the planned research mission into Lorenzo.  NOAA43 was the first SAR-capable asset to reach the incident site, but the crew did not find anything upon arrival.  With growing concern about the fate of Bourbon Rhode crew members, the NOAA43 crew quickly decided to abandon the Lorenzo research mission and continue SAR support.  With little information besides the last-known location of the Bourbon Rhode, they quickly adapted to the situation and developed a SAR flight plan.  Crew members rearranged themselves by any available window and called out locations of suspected targets or debris while surveying in the vicinity of the last known Bourbon Rhode position.  Poor visibility, extremely large waves, and turbulence from strong rainbands posed difficult challenges as NOAA43 received sporadic emergency beacon signals.  With only minutes left before the plane needed to head back to Barbados due to fuel limitations, crew members spotted debris and what appeared to be a life raft.  This information was relayed to SSI EXCELLENT, which was en route to the SAR area. 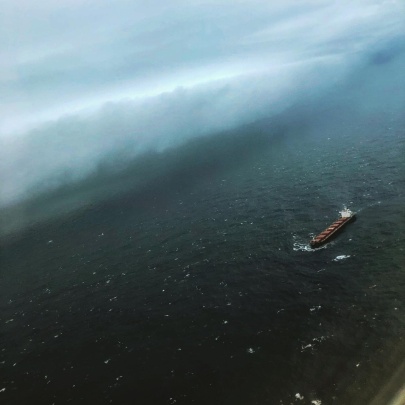 On September 28, NOAA42 (nicknamed Kermit) flew a SAR mission in coordination with SSI EXCELLENT and other supporting marine vessels across the search area.  As Hurricane Lorenzo moved farther away, improving weather and marine conditions allowed the plane to fly as low as 200 feet above the ocean surface.  The NOAA42 crew (see list at the end of the post) conducted visual searches while listening for emergency beacon signals, guided by previous reports from NOAA43 as well as new information from supporting ships.  Crew members located a large debris field and the remains of several sailors, and they directed ships to these locations so the victims could be recovered.  The dedicated efforts of NOAA personnel significantly narrowed the search region and guided ships toward the area where a life raft was discovered later that day.  Three Bourbon Rhode survivors were rescued from that life raft in the Atlantic Ocean. 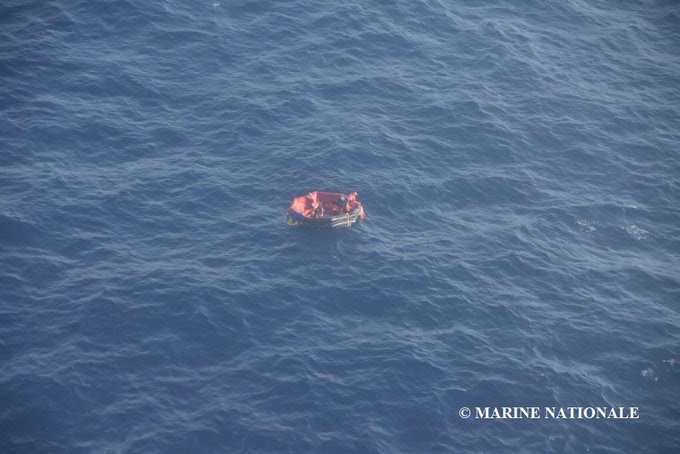 NOAA assets played a pivotal role in early SAR efforts, which were led by the Maritime RCC Fort-de-France on the island of Martinique.  As the international search efforts continued, TAFB provided six-hourly forecast updates on wind, wave, and weather conditions.  From September 26 to October 5, 2019, TAFB produced 35 spot forecasts (see example below) that were shared with RCC Miami and MRCC Fort-de-France in support of this unprecedented SAR operation.  Over two weeks, 21 ships and four aircraft searched over 110,000 km2 (about 42,500 mi2) of the central Atlantic Ocean for survivors.  Four bodies were recovered, and seven others were declared lost at sea after SAR efforts were officially called off on October 5, 2019. 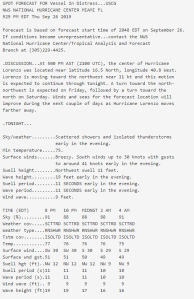 The first of 35 spot forecasts that NHC/TAFB marine forecasters sent to USCG and international partners in support of Bourbon Rhode SAR efforts.

Additionally, TAFB forecasters prepare and deliver live briefings to USCG District leadership when tropical cyclones threaten USCG SAR regions and U.S. ports.  In 2019, TAFB delivered 42 tropical briefings combined to USCG District 7 and District 8, including 25 briefings for Hurricane Dorian.  “I cannot overstate how much your [NHC/TAFB] insight into the storm’s effects is vital to our planning and response efforts,” commented Captain Eric Smith, Chief of the Incident Management Branch for USCG District 7.

Tragedies like the Bourbon Rhode highlight the importance of TAFB standing ready to provide year-round IDSS support to core partners.  In this case, the dedicated IDSS provided by TAFB forecasters, combined with the valiant efforts of NOAA AOC crew members and HRD and NESDIS researchers, played a critical role in the international rescue efforts that ultimately saved three lives.

Acknowledgments: Special thanks to Zorana Jelenak, Kelly Ryan, and Joe Sapp for sharing their personal accounts of this experience with the author. Additional thanks to Jonathan Shannon, Shirley Murillo, Jon Zawislak, Nathan Kahn, Patrick Didier, and Erica Rule for their helpful input and feedback.

Beginning of the Atlantic Hurricane Season